Skip to primary content
Skip to secondary content
Could it be the Seventh Sign of the Apocalypse? Could the Mayans be right!?
Today it all seems possible because… Jake actually listened to me!
Here was the scenario: It’s nap time. He’s crabbier than a inner-city street-hooker. I put him in the crib with a passy and walk out. I hear the passy hit the wall, and Jake starts whining. See, he’s used to “The Magic Booby” or me putting him in “The Sleeper Hold” for a few minutes before nap/bed time.
Mama J and I are trying to break that habit (that we created…yes, we are our own worst enemy at times) and establish a routine, and hopefully some more independence for Jake.
I let Jake whine for another 15 minutes or so, and then walked back in his room, as gently as a shit-house mouse. I stuck his passy back in his pie-hole, layed him down, and pulled his bwanky over him. I said “Jakey, it’s time to take a nap like a big boy. Love you. Peace out.”, and walked out of the room.
I heard some rustling around, a whimper, and then…silence! That was over an hour ago, and he’s still sawing logs! I don’t know about your kid’s sleep schedule, but Jake’s seems to change every other month or so. And, so does the way in which he falls asleep. Hopefully, the new trend is him just simply…lying down and drifting off to sleep. And maybe the Cubs will win the series this year, too!:)
Raising a child is a true lesson in patience, compromise, and adaptation. Unless you’re rich enough to hire a team of nanny’s:)
Jake is becoming more elusive than the Sasquatch! Every time I try to catch him on tape, he’s sprinting, OK crawling, on to the next thing!
His comprehension levels in the last month alone have really to started to skyrocket. He’s mimicking almost everything we teach him. From shaking his shoulders when we say “dance, dance, dance”, repeating noises and sounds, and my new favorite…Touching his finger to his mouth like a little Dr. Evil in deep thought if he hears Mama or I say “HMMM???”
The only frustrating part is that by time I get the camera ready, he’s firing his lunch across the room or trying to pull his diaper off. Would you just sit still for two seconds and do something cute ya little monkey!?!?
My son has discovered his weenis. Every time he’s in the tub, being changed…basically any chance he has to get at it, it’s like he’s pulling taffy! The kid barely touches his ears or his nose. But the wang…it’s his new best friend! I guess it really does start at a young age!!!
Team 3 enjoyed a fun-filled afternoon of appliance shopping! What could be more exciting than deciding between a side-by-side, or french door type refrigerator?
Mama-San was taking care of asking all the important questions, while I was flying Jake around the store like a little Iron Man. Apparently, I zigged while I should have zagged, and Jake managed to flood his diaper with 3 parts hot piss, and one part nutty fudge!
First, I noticed a slight odor. Then my worst fear was realized when looked down to see my jacket soaked! Thank God, I only got hit with the Number One!!!
Luckily, we never travel without a spare get-up for the “Mad Pisser”. He was changed out and back in the store within minutes. Mama J and I are like a Nascar pit crew when
it comes to changing this little shit now.
The salesman caught a laugh from the ordeal, and so did we. But from now on, I’m carrying a spare get-up with me too. My jacket still smells like piss!:)
Tonight, my Aunt hosted the annual (and obviously belated) GAG Gift Christmas exchange! What better chance to take light-hearted jabs at your own family members, or just be flat out gross!?
I received a squeezable container of delicious Cuban Black Bean Bisque. Nothing funny or gross about that, right? Not until you’re instructed to squeeze it into a bowl as quickly as possible. The squishy, farting sounds made as you discharge what could easily be mistaken for dog crap just so happens to be both funny and gross at the same time! Mission accomplished.
My wife, the giftee, received a note stating that the gifter had came upon an extra iPad through their business and decided to pay it forward. Little did she know, that “iPad” was actually a huge, moose-crotch sized maxi-pad with a big “I” drawn on it. Another great success!
Yes, sense of humor runs on both sides of our family. It’s no surprise that Jake’s latest habit is laughing until he actually turns red in the face. I’m not exactly sure what he’s laughing AT yet? But I love it!
Wazzup!?!? It’s been over a week since my last futile attempt at a post. See, work has been crazy. (Remember, I work shit, I mean shift work:) I haven’t had many days off since Christmas. And since I haven’t been home to see Jake very much, I didn’t have many stories to tell. I assumed he’d be dating and have pubes by now, but I wasn’t sure. I also assumed that you were tired of hearing my little old stories about being a Dad. Yet, two people in the last week asked “Why haven’t you been writing?, and said “Just keep doing it!” So here I am…

I CAN NOT believe how much this little monkey has evolved in only 3 weeks!!! Spitting out syllables like a midget rapper! Chasing me around the room in his walker chair! Bopping his head to music! We played “catch” with his rubber ball! And for the first time, he took my big-boy drum sticks and did the “right-left-right-left” on his drum!
This kid never ceases to amaze me. He’s always changing. Getting bigger, smarter, stronger, more animated…
OH! I forgot something to add to the “first” list! He somehow learned to wrap his arms around our necks and give us great big hugs. I love that little monkey:) 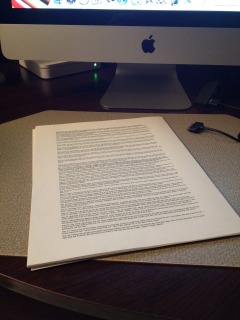 There it is. ‘Jake 365’. 23 pages, single spaced, size 10 font. There are a LOT of words packed into those pages! It took a year to complete, and I feel like that was easy compared to the project ahead.
I have so many ideas on how to lay it out. I think I’m going to use mypublisher.com for the actual printing. The good news is, there is no deadline. I can tweak and revise until I’m blue in the sack. An even bigger relief is, I’ve already hired my Editor…. 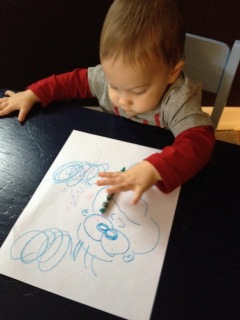 “Well, if you like burgers, give ’em a try sometime. I can’t usually get ’em myself because my girlfriend’s a vegetarian which pretty much makes me a vegetarian. But I do love the taste of a good burger. Mm-mm-mm.” – Samuel L. Jackson in Pulp Fiction

I can totally identify with Mr. Jackson’s quote. My wife is what I would call 98% vegan. I think the only reason she adds meat to most recipes is to appease me. She could eat a huge salad every night for dinner, while I’d prefer a steak with some bacon on the side. It may be the reason she can wear the same clothes she did in high school, while I’m built like Chaz Bono.
I have to admit though, it’s starting to wear off on me. I’ve been making a conscious effort to add more fruits and vegetables to my diet. After only a couple weeks, I really do feel better, and my man tits are down almost a full cup size! I never knew celery could taste so good if it wasn’t stuck to a huge glob of peanut butter with some raisins in it!
Jake’s hooked too. Don’t get me wrong, he likes him some chicken. But how many kids eat cauliflower and broccoli without projectile vomiting it back in your face? I know I didn’t! It makes me feel good to know he’s getting the most nutritious food possible. Each week we have a huge box of organic fruits and veggies delivered to the house. It’s actually less expensive than if you purchased the individual items at Walmart. And it’s like Christmas each week because they always throw in a few surprises. So rather than sugary treats for desert, Jake gets an apple or yogurt with some berries or nannas in it. He loves it!
This whole “eating cleaner thing” feels great! But I’ll never go full Vegan. I have to say, I just like the taste of meat in my mouth sometimes. Wait! What I meant was…

I know I’ve been slacking lately. A puzzling loss of direction mixed with the 80 hour work week has put a damper on my play time here. No excuses, just sayin’… Now that I’ve finished Jake 365, I’m kind of at a loss on which way this crazy thing is supposed to go? My winter project is to work on Jake’s book. Other than seeing some stats on here, I have no real idea if people actually read what I’m posting? I started this thinking the site would become a discussion board. But so far, most of the action’s on Facebook. I guess I’m at a crossroads?
This has become such a fun, therapeutic habit for me that I can’t see NOT doing it anymore. This may just be the perfect chance to take this site to a new level? I have been so focused on talking about Jake and my experiences, that I’ve gotten away from keeping this about the parents and the funny business we deal with everyday!
When people ask, “what’s your New Year’s resolution?”, I don’t really answer. Why make a one time promise to yourself to try and achieve some goal that you only half-heartedly came up with in the first place, and have no real intention of committing to? In the movie Vanilla Sky, Penelope Cruz summed up what I’m trying to say in one simple sentence. “Every passing moment is another chance to turn it all around.” I love that quote. To me, it says every day can be your New Years Eve. You can set new goals for yourself every single day. Make them attainable, with the seemingly unattainable as your reward. “Keep your eye on the prize” as they say. Whoever “they” is…

Where do I go from here? I’m not sure yet. But I’m NOT quitting. Thanks again Penelope. Your words of wisdom have saved me many times;)

Thank you for spending most of 2011 with me. I wish nothing but a healthy, prosperous 2012 for you and everyone you love!